To Walk in the Sun 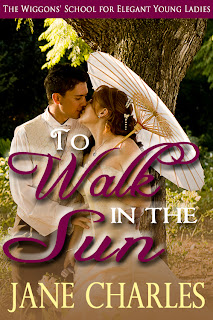 Hiding from a dangerous man, Tess Crawford thought The Wiggons’ School for Elegant Young Ladies would be the perfect place to disappear. Or it would be if the local villagers weren’t on edge because of the vampire in their midst, at least they think he’s a vampire. The fascination with the reclusive viscount disrupts the girls’ studies and Tess fights an unending battle to convince her students that monsters do not exist.

Vincent Latimer, Viscount Atwood, is not a vampire, no matter what the villagers believe. He wishes the book, Wake Not the Dead, had never been written. There is a very good reason he visits his wife’s grave at night, and it has nothing to do with trying to raise her from the dead.

When a storm thrusts Tess into Vincent’s path and destroys the school, both of their pasts collide.

Available at  Amazon.com, BN.com, or Smashwords.com

Posted by Jane Charles at 4:56 PM No comments: