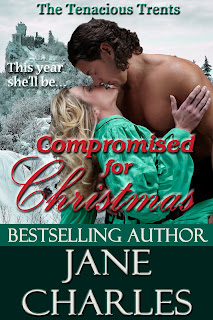 Compromise for Christmas, a novella, will be released on Tuesday. I know, it is strange to release a Christmas story in June, be there are very good reasons (I think).  Compromised at Christmas first appeared in A Summons from His Grace. It later appeared in a compilation, Scots, Spies & Salacious Lies. The reason it is now going solo is because it was the first Tenacious Trent story written.  These brothers and sisters were only characters in my mind and have became a family I love writing about.


Lady Elizabeth craved excitement and adventure. Unwilling to endure further boring Seasons, she convinces her uncle, who has lived a more adventurous life than anyone else she knew, to let her work for him. A few years later Elizabeth was established in Tuileries Castle, a servant in Napoleon’s court known as Lisette Renard.

John Phillip Trent has been working in the stables of Tuileries as Jean Pierre Bouvier for the past two years. His only English contact being Lisette Renard, a lovely blond lass, who he desired but kept at a professional arm’s length.

When Lisette receives a summons to return home for Christmas, John learns that she is none other than the granddaughter of the Duke of Danby and she had named Jean Pierre as her husband. Their cover is compromised with the same letter and the two find themselves escaping the palace and France, knowing they could very well never see each other again and must face the truth of how they truly feel for the other.

Posted by Jane Charles at 5:11 PM No comments: