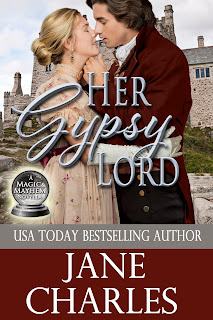 Lady Charlotte Beck craves just one little adventure, which is nearly impossible as her older brothers are the most diligent of chaperones. However, when her family is summoned to Castle Keyvnor for the reading of her great-uncle’s will, Charlotte can hardly contain her excitement. Ghosts, magic and gypsies seem to be the ingredients to the adventure she’s been searching for. However when she meets Adam Vail in the nearby gypsy camp, it maybe another adventure all together that calls to her soul…if she can survive Castle Keyvnor and one very murderous ghost.

“A man like Thomas did not deserve to be viscount.” Her dark eyes looked into Adam’s. “He was one of them.” She practically spit out the word. “You, my dear boy, are one of us. A Rom.”
If anyone else referred to him as a dear boy, Adam would take issue. But, this was his grandmother.


And, he was Rom. It was in his bones. He much preferred the life of a gypsy, though that wasn’t his lot in life. He was destined to be the next Viscount Lynwood.

Posted by Jane Charles at 7:27 AM No comments: