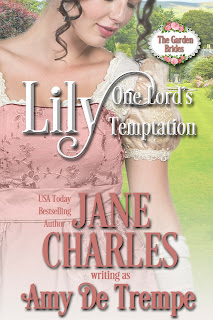 Lady Lilian Bliant appears to be a serene earl’s daughter, but under her exotic façade she has a spine of steel.  She is determined to thwart her manipulative father’s plan to shackle her to a weak-willed man of the ton and is successful until Lord Maxwell Warrick becomes a suitor.
Lord Maxwell is anything but weak-willed. He is happy with his life until Lady Lilian wreaks havoc on his heart. No lady has ever tempted him as she.
Will Max be able to resist, or will he succumb? And, if he does, will Lily be able to resist?

Posted by Jane Charles at 1:59 PM No comments: