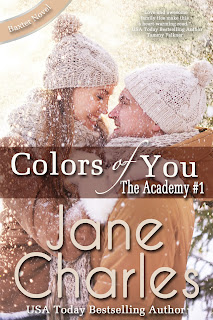 Alexia Deme likes her quiet life as an art teacher at the Baxter School of Art, a high school for the talented and troubled. It was a long journey to get here, but she’s finally on her own and where she wants to be. Though nothing is ever permanent, this might be the first place she can stay for a while. At least she thinks so until that peace is disrupted by a fleeing felon, turning her world upside down and bringing the past to her present.

It was a normal, typical day when Officer Kian O’Brien got the radio call and took off after a fleeing suspect, over the walls of the Baxter Academy of Art and to the side of Alexia Deme right before she nearly collapses in his arms. In one moment, everything in his life is altered and the more Kian comes to know Alexia, the more he cares.

But, can he keep her from fleeing when the past comes back to haunt her? He’s not ready to let her go, but can he convince her to stay?

***Recommended for adult readers due to language, sexual content and adult situations***

I grab the young teacher’s arms as her legs give way. Slipping an arm around her waist and supporting her the best I can, I lead her to a cushioned, iron-bench beneath a shade tree. Blood drips from the back of her head and soaks into my shirt. She sits and puts her hand down at her side as if to support herself. I settle beside her for fear she might fall over. She needs medical attention and I radio for an EMT. Not only is her head gushing blood, but she’s unstable, and it looks like her right wrist is swollen and injured. I don’t have the medical knowledge to know if it’s a break or a sprain.
“Look at me.”
She slowly tilts her head up then squints her eyes at me, trying to gain focus. They are such a beautiful, dark brown, framed with such thick lashes. I blink and look more intensely, studying the size of her pupils since she did hit her head pretty hard.
“An ambulance will be here in a moment.”
“Don’t need one.”
I don’t argue the point. She’s in no condition to make any decisions right now.
Her glance drifts lower as she sways, and her gaze locks on the badge at the left side of my chest. “Fucking pig.”
Okay then, I laugh to myself. This one obviously has no affection for cops, but I won’t hold it against her. Besides, in my short one year career, I’ve been called much worse, though nobody’s ever called me a pig before. That’s what my dad was called, and usually by people who were old enough to have been at Woodstock.
“Why don’t you lie back?” The way she’s swaying from side to side, she won’t be able to hold herself upright much longer.
“No.” She glares at me. “The boys. Bring them back.”
“They’ll be returned after questioning.”
She groans and lays back and then winces as her head comes in contact with the cushion. “They didn’t do anything wrong.”
She’s right. There’s no reason the kids had to be treated like criminals, but that’s an issue I’ll take up with my sergeant later.
There’s no color to her lips and she’s grown pale. I hope the EMTs get here soon.
“Bring them back,” she mumbles, nearly slurring her words.
Her eyes are drifting shut. Shit. I can’t let her pass out. Isn’t that the first rule of a head injury? “I promise, I will.” She’s still bleeding and I know heads can bleed a lot, but what if it’s worse than I thought?  I shift and turn her so her legs are resting on the cushion and she’s practically lying down. I squat on the ground beside her. Her breathing is even. That’s good, but she needs a doctor now.
She opens her eyes slightly. “I don’t trust cops.”
I’m not surprised. She had just called me a fucking pig. “You can trust me.”
She snorts.  “That’s what they all say.”
Her arms stiffen and she grabs the cushion, sitting forward as she groans. I know the look and sound too well, but can’t move quick enough to avoid her puking in my lap. Given her feelings for cops, I don’t ever expect an apology.

OTHER BOOKS IN THE
BAXTER ACADEMY SERIES ~ THE ACADEMY