Merry & Bright for TOYS FOR TOTS

Merry & Bright
for TOYS FOR TOTS 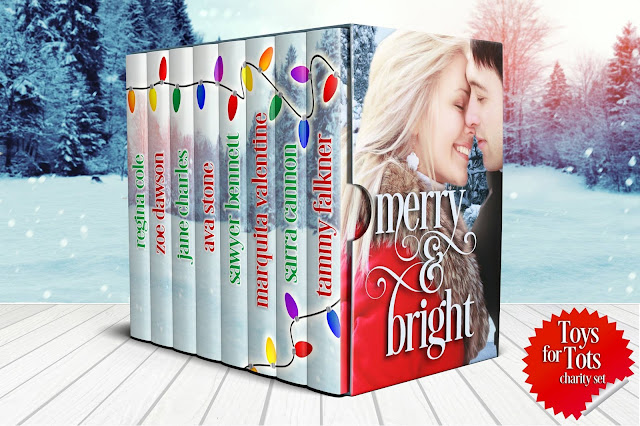 CHRISTMAS WITH THE REEDS by Tammy Falkner

Only three things matter to Kelsey Fry: an envelope full of memories, a pink box full of hope, and a well-planned future, soon to be realized. Alex Dosek knows that Kelsey needs more than the tattoo he gave her. Who would have thought a house full of boys—Alex and the Baxter boys—would be a refuge for Kelsey?

READ THE FIRST CHAPTER OF
STILL RATTLED BELOW

I didn’t even think when I asked Kelsey back to the house. The guys will be surprised, but I hope they aren’t pissed. Not that they should be. It’s not like I just grabbed a stranger off the street and brought her home to be fed. Not that they should have a problem if I did.
Okay, maybe a total stranger in our home would be a bad idea.
Kelsey narrows her eyes on me. “I don’t like surprises. And I’ve already had enough today.”
The seeing me and almost bolting from Reed’s before getting her tattoo, or the tat that wasn’t just a foot? I’m not sure I want to know. She loved the tat, but she didn’t love seeing me, at least not at first.
“Trust me. It’s a good one. You’ll fit right in.”
Kelsey blows out a sigh. “Listen, I don’t do family meals well. Is somebody’s family going to be there?”
I seal my lips and make a sign like I’m throwing away the key.
“If I’m uncomfortable, I’m leaving, okay. No making me stay.”
Kelsey has her defenses up, like she’s afraid. I get it. I’m not exactly open to strangers either, but she’ll be happy once she sees who’s there. At least, I assume she will be. “Only long enough to fix you a plate so you can take it home.” Maybe she’ll relax knowing she can walk out the door as soon as she walks in, if that is what she wants, though I doubt it will happen that way.
She gave me a small smile. “Is there going to be pie?”
“Chocolate, pumpkin and cherry.”
Her eyes practically rolled back in her head as she groans. “I can’t remember the last time I had pie.”
I’m surprised that particular dessert didn’t bring all kinds of unpleasant memories. She was delivering a piece of pie to Brandon when he was killed.
The smile slips. “I couldn’t eat pie for two years after Brandon died.”
Could she fucking read my mind?
“Then I realized, if I hadn’t been taking him a piece, I wouldn’t have been able to say goodbye and tell him that I loved him. I would have just gone home and waited for him to get off work.” Her dark eyes meet mine. “So, pie is good.”
“And, these will be delicious.”
The train slows and I glance out to see where we are. I haven’t been paying close attention to the stops, but we’re getting close.
Close? Hell, this is my stop. If I hadn’t decided to look this time, we would have gone right past and that would have been a pain in the ass to get off at the next stop, and then go around and grab the train going in the opposite direction.
“Here we are.”
She takes a deep breath and steps out onto the platform. “Are you sure they won’t mind?”
“I promise,” grabbing her hand, I head for the stairs to exit the subway.