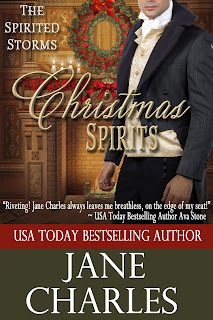 Mary Soares was supposed to spend Christmas, nice and warm on her family’s estate in Falkirk, Scotland, tending to their whisky business. However, the English have made smuggling almost impossible, and so order after order is waiting at the distillery until it’s safe enough to continue shipments. Most customers understand this. Most customers are reasonable. The Duke of Danby is not most customers. After a number of demands from His Grace, insisting upon his order, Mary decides to deliver the whisky herself.

Benjamin Storm, Earl of Kenley, breathes a sigh of relief when his summons from the Duke of Danby has nothing to do with matrimony or a stack of special licenses. Instead, his uncle just needs Benjamin to travel to Scotland and procure his missing whisky shipment in time for his holiday festivities. The chore sounds easy enough, at least until he encounters a most unusual smuggler on her way to Danby Castle. Benjamin’s life may never be the same.

*This story originally appeared in “The Duke’s Christmas Summons” anthology.

I am very much aware that you have been avoiding me since the wedding of Mr. Jonathan Bridges and Miss. Genviève Mirabelle nearly a year and a half ago. Your excuses in the past have been flimsy at best, and I will accept no more. You will attend me in Yorkshire, with your equally absent siblings and remain at the castle through December 26th. If you wish to stay longer, I have no objections. However, you must present yourself to me no later than December 17th. If you fail to do so, the retribution will be harsh and long in duration.

“Are ya certain Lachlan is no’ goin’ to return for Christmas?” Mary Soares asked her mother, hoping for a different answer this time.
“Ye ken his wife just had a bairn. They canna travel.”
“I doona know why she couldn’t have had the babe here like the first one,” Mary grumbled. Had her brother and Madeline just come north for the birthing then she would not be in this predicament.
“Yer brother had it difficult enough this summer with all the rain, getting’ stuck on the road, the poor barley crop, and bleak skies. He dinna wish to add to his troubles by takin’ his family away from Grosmont for fear they’d get stuck or encounter ice covered roads.”
“Aye, but the babe was born a month ago. Surely he could come now.”
“And not make it back in time for Christmas?” her mother scolded. “That would be unfair to Maddie and the children.”
Mary blew out a breath. Of course her mother was right, but it didn’t help their circumstances at the moment. With a sigh she settled at the scarred table in her work room. Her brother, Lachlan Grant, Marquess of Brachton, was to have seen to the delivery of the mounting orders for whisky. Her sister’s husband, Magnus, was to have helped, but he’d fallen from a ladder nearly a month ago and still couldn’t stand up straight without severe pain.
“I wish Ian would come home.” Ian was the next oldest, and in charge of the distilling, but he also helped with deliveries on occasion. However, he’d been in Edinburgh for the last fortnight waiting on the ship to take whisky to London. For years Jonathan Bridges had shipped her brother’s whisky to his London warehouse and the ship was to have been here by now, but had been delayed by the weather. At least that was what they all assumed. But, until the ship did dock, Ian had to remain because they trusted nobody else to see to the cargo.
There were several men and lads who helped with the distilling, but never on the deliveries. It was far too dangerous. She’d never forgive herself if they were caught by the excisemen who were currently in the area looking for smugglers. She’d seen the lights when they appeared on the hillside as soon as the sun set yesterday. A warning to all of them not to take the whisky from hiding until the gougers were gone.
At the moment, Mary had few options available to her. They could pay the taxes, which were so high that it was impossible to make a profit. Wait until the excisemen were gone. Or, risk moving the whisky. If caught, the whisky would be confiscated. Or worse, someone could be killed. It wasn’t unusual, unfortunately, for fighting to break out between the gougers and the smugglers, especially along the border, often ending with someone’s death. Tensions were high as it was. Crops failed this last year because of the unusually cold weather, and food was scarce in many places. Not only did smugglers need to worry about the excisemen, but thieves as well.
In the past, only Lachlan or Magnus drove the wagon to the docks in Edinburgh or over the border into England but as neither of them were available, the task would now fall to her.
She rifled through the orders, setting aside those who would receive a note explaining the delay and held back the most demanding requests. Three letters and all from His Grace, the Duke of Danby.
If she thought him reasonable, she’d write to him as well and explain the current set of circumstances they found themselves in, but nothing about the Duke of Danby struck her as reasonable. Demanding – yes. Reasonable – no.
He’d been to her home twice, when once would have been more than enough, to call on her brother. Why His Grace hadn’t called on Lachlan at his estate in Grosmont was beyond Mary’s comprehension. Grosmont was in Yorkshire, Danby Castle was in Yorkshire, so it stood to reason that estate was much more convenient for His Grace than traveling to Falkirk, Scotland.
He was also their most important customer and one they did not wish anger. Lachlan had reminded her time and time again that whenever His Grace requested a shipment, it was to be sent immediately. Which was all fine and good, until there was no one to make the delivery.
She needed to find a way to get the whisky to Danby Castle and the rest would just have to wait. Except she had no idea how to go about it.
Lifting the lamp from the desk, Mary made her way to the stables. She could use the traveling coach, with the Brachton coat of arms, as her brother often did, with the bottles wrapped in wool and hidden in the seats and floor. But, that would require a driver and a maid to accompany her, thus putting three people at risk if they were caught.
Beside the coach was the wagon Magnus used for deliveries, and above it on wide shelves, the means in which he used to hide the whisky. A smile pulled at her lips. “Of course!” She had driven many wagons in the past and was quite comfortable doing so. Happy with her plan, Mary made her way to the distillery and gave instructions to have the wagon prepared so that she could leave at first light and hope the excisemen were gone. She couldn’t delay longer or His Grace wouldn’t have his whisky in time for Christmas. She wouldn’t be home by Christmas, but at least His Grace would be happy, and that was really all that mattered.