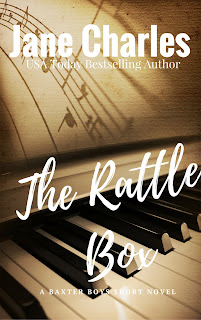 Two things stand in the way of Madison Cross realizing her dream of studying music performance and composition at a prestigious college:

1) Her parents, who don’t understand or get her, and want her to attend a community college and settle on a career that will actually support her one day; and
2) A private instructor.

No music school is going to take her seriously with only middle and high school instruction, but she has never been given the opportunity for private instructions (see #1 above).  Her one shot is convincing Mrs. Dosek, a well-respected pianist who teaches for free, but the woman won’t return an email, let alone talk to her.

When Madison discovers a pink box of letters hidden in her parents’ attic, she’s consumed with wanting to know more about the woman who wrote them. Through reading the heartbreaking letters, Madison comes to learn more than she ever dreamed of about herself, but now she has to face her biggest fear, and it has nothing to do with college.  She must learn where she came from in order to find out where she’s going.

“She’s here,” I whisper to Peyton Walker, my best friend.
Peyton leans around me. “Mrs. Dosek is here?”
“Yes.” The moment I see her, my heart begins to pound as my palms break out in a sweat. I swipe them against my jet black skirt, take deep breaths and try to compose myself. Maybe this time Mrs. Dosek will hear me play. Then maybe, if I play well enough, I can become one of her students. One on a small list of exclusive students, some of which have been accepted to Juilliard.
It’s my junior year of high school, and if I don’t get accepted to Juilliard before my senior year, I might never be. Music is my passion. The piano, cello and violin, though if I had to pick only one, it would always be the piano. I want to compose and play.  That’s all I want in life, but all my lessons have been limited to what’s been offered in middle and high school band and orchestra classes. I need more if I’m going to go any further. More meant a private teacher, something my parents couldn’t afford. Maybe if they hadn’t adopted six kids, they might have the money for lessons.
It’s selfish, of course. Had my parents limited the number of kids, I may not have made the cut, and then where would I be? And, I wouldn’t trade my siblings for anything in the world. Well, except my youngest brother John, who spilled grape juice on my favorite white blouse this morning.  Luckily I have two others or I would have been screwed. Black and white – orchestra colors. Judges frown on color, and if nothing else, I am a rule follower. Music is too important. Winning competitions is necessary. Each win and award is another item on my application to Juilliard.
The only thing I’m lacking is a private piano teacher. I need to become a student of Mrs. Dosek.
I had first heard of her when I was in seventh grade. She only took piano and voice students who had talent. And, she didn’t charge. Ever!
“I heard Brooke’s parents just offered Mrs. Dosek a thousand dollars a lesson,” Peyton whispers in my ear.
“Wow! That’s a ton of money.” Brooke’s parents were loaded, and Brooke was convinced she was the best pianist to ever grace the halls of my high school, East Central. She had a baby grand to practice on at home. I have an old upright that used to be a player piano, it was that old. The kind that once had music on the inside and played at the push of a button. Those guts are gone now, but it still plays well. Brooke has always looked down on Peyton and me as if we aren’t quite good enough, even though Peyton’s parents are probably as rich, if not richer, than Brooke’s.
“I know!” Peyton looks over my shoulder. “Mrs. Dosek turned them down. It’s not about the money but the talent.”
I glance at Peyton from the corner of my eye. “I bet Brooke didn’t take that well.” I hate Brooke, and I’m jealous of her. Not only do the teachers fawn over her, but she’s had private lessons since she was five. I’m glad Mrs. Dosek turned her down because that would have killed me if Brooke got lessons with her and I couldn’t even get the woman to notice me.
Peyton snorts. “Considering she thinks she’s the best of the best, no, she didn’t.”
“Well, Mrs. Dosek is here today.” I blow out a breath. “I just hope she stays to listen for a change.”
“It is weird that she always leaves right before your turn.”
It’s something Peyton and I have talked about before. I’ve seen Mrs. Dosek at several competitions and concerts but she always leaves before I play. How the hell can I get her attention if the woman doesn’t stay long enough to listen? “I emailed her again.” For like the umpteenth time.
“Response?” Peyton asks.
“Silence. It’s as if she has something against me or something. If she heard me play and wasn’t interested, that would be one thing, but since she never has, and we’ve never met, I can’t imagine what she has against me.”
“I’m sure it’s just a coincidence. I know other people who have emailed her too, and she didn’t respond to them.”
“At least I’m not alone.” Not that it makes me feel any better. I’m sure I’m just one of dozens of potential students trying to get her attention. “I just wish I knew the trick to get her to notice me.”
The pianist before me finishes, bows and then exits the stage.
“Good luck,” Peyton whispers.
I take a deep breath, clutch my music.
“Madison Cross,” the judge announces, and I step out onto the stage. I can’t help myself and glance to the seat where Mrs. Dosek had been sitting.
It’s empty and I catch a glimpse of her just as she exits the auditorium.
Tears spring to my eyes as I walk to the piano. Another opportunity lost.


After placing the music, I take a seat, as disappointment sinks into my belly. If I weren’t on stage, I’d completely lose it, but I hold my shit together and blink so the tears don’t fall, and I start to play. I can’t see the music, but I don’t really need to since I memorized these pieces long ago, starting with Brahms’ Lullaby—the first of my four Brahms’ selections for this afternoon. The judges want emotion, in addition to skill, along with four levels of difficulty. Well, I’ve got the emotion, and if even a quarter of it comes through in my music, I’ve got the competition beat. And, it’s Mrs. Dosek’s loss for missing it.
Posted by Jane Charles at 11:29 AM