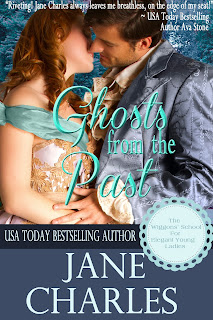 Anton Kazakov loved one woman and thought to spend the rest of his life with her. Never would he have imagined that she would betray him, leave him for dead, and disappear completely.

When all that she loved was lost, Natalie Pritchard returned to England to hide from her past and teach at The Wiggons School for Elegant Young Ladies. All has gone as planned, until one fateful night threatens the security she thought she’d found.

Now, Anton has found his Natasha and ghosts from both of their pasts emerge. As the web of treachery, deceit and lies are unwoven, will they survive long enough to find the truth?

Anton Kazakov quietly let himself out of the house. On the street he glanced up to her window. He left Natasha to slumber, a small smile on her lips and their marriage well consummated. Dimitri, her brother, would kill him if he knew what they had done tonight. Anton could no longer deny his desire for her, the woman he loved, the woman he married in haste and in secret. With those thoughts in mind, he began his trek home to gather the last of his belongings. Then, he and Natasha would escape Sankt Peterburg and Russia.
Time was of the essence and he did not want her caught in middle if anyone learned his secrets. The choice had not been an easy one, but he could not stand by and serve a Czar who aligned himself with a madman like Napoleon. If Czar Paul I kept making such unwise decisions, someone was bound to relieve him of his life. But that was not his concern. He had done his duty and needed to relay the latest information he learned of Paul’s expedition in India. Rumors had already been leaked to him that the Russian soldiers were closing in on the Ghost. It was time to disappear.
His steps quickened down the street. An uncertain, uneasy feeling settled into the pit of his stomach. It had grown as the day grew long. Hair stood up on the back of his neck. Did the discomfort stem from his desire to always be with Natasha and his fear it may be denied him? Or, did it stem from the dangerous game he played? Perhaps he should just turn around and take her from the country now. He could make do with the clothing on his back until they were safe.
Decision made, Anton altered his route to make his way back to her house but was brought up short by four soldiers.
He gulped and tried to remain calm. Maybe they were not after him. He turned again and hastened his steps.
“Anton Kazakov, halt.”
He broke into a run. Their feet pounded behind him.
“You are under arrest for high treason, Ghost,” one of them called.
Sweat broke out on his brow. Anton spotted the corner up ahead. He could lose them.
A shot rang out. Pain tore through his back and he stumbled. No, this was not happening. His steps faltered. He tried to run, but he could not make his legs work.
The soldiers caught up to him when he fell to the ground. Anton rolled over and looked up at them. “Who?”
A young soldier grinned. “Natasha Petrov and her brother, Dimitri.”
The others laughed.
“I hope you enjoyed her bed tonight, for that was the last pleasure you will ever know.”
Pain pierced his heart at her betrayal. Worse than the shot in his back. But the soldier had to be lying. Neither Natasha nor Dimitri would ever betray him.
His world went black.

But they were happy, for they knew not enough of the world seriously to regret the
want of its enjoyments, though Julia would sometimes sigh for the airy image which
her fancies painted, and a painful curiosity would arise...

Anton Kazakov grinned into the darkness and watched the carriage pull away. He still could not believe she shot him. Though his arm throbbed from the initial impact, he expected the injury was nothing serious. He should be insulted, but Natasha could not have known it was him. Heaven knew, she had never objected to his kisses before. However, how could he be sure any of their past was true? Perhaps he should be glad for the disguise, because had she known it was him, she may have aimed for his heart.
“Did I hear gunshot?” Vanko Michalovic asked as he reached Anton, ever the loyal companion. Vanko had spent nearly a year in a Russian prison cell with him. When the opportunity for escape came, Anton took his friend and brought him to England. The man was younger, but they bonded, nearly as close as brothers in that hellhole.
He grimaced. “You did, my friend.”
“This is dangerous. Is it worth being killed over?”
Anton laughed. “I will no longer be stopping carriages.”
Vanko sighed, probably with relief and dismounted. “I’m glad to hear. I’m sure you will come up with plan.”
Anton grabbed the reins and mounted his horse. He clenched his jaw against the pain that shot through his arm. “No need.”
“You found her?” the other man asked with astonishment.
“Tonight,” he answered with a grin. “She shot me.”
Vanko’s laughter followed him as Anton turned his horse back toward the road and set off after the carriage. He couldn’t believe he’d finally found Natasha and he’d almost given himself away when her grey eyes had met his.
He shifted in his seat and adjusted the reins. His left hand grew numb and he glanced down at his arm, now drenched in blood. Had Natasha done more harm than he initially suspected? One would think he would be able to tell if he were seriously injured. Then again, perhaps not. How many times had he been convinced he was about to take his last breath while in prison only to live another day? Had the torture he endured numbed to him the pain of a life-threatening injury? He didn’t think it was possible. Still, he would check his arm once he returned to his new home. But first, he would follow Natasha. He needed to know where she lived and determine if Dimitri Petrov, her brother, was with her. He couldn’t imagine Dimitri would be far, but he never expected it to take almost a year to find her either.
Did she and her brother still spy for the government? If so, why was she hiding here when she could have a comfortable life in Sankt Peterburg?


On reflection, he doubted either of them retained ties to Russia. The ruler they supported was now dead. Paul I had been assassinated shortly after Anton’s arrest. Natasha and Dimitri probably decided to return to England, comfortable and away from anyone who would ask questions. Not that it mattered to him. He wasn’t out to find Natasha for the pleasure of it. He was out for revenge. After nearly a year of searching the English countryside, he finally found her. The woman who betrayed him.  His wife.