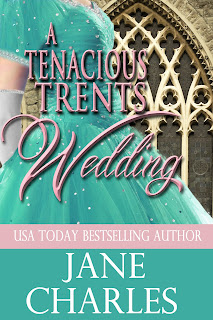 A SECOND EPILOGUE: Catch up with the Trents, meet up with old friends, and possibly meet someone new.


You are cordially invited to the wedding of Mr. Jonathan Bridges and Miss Genviève Mirabelle. The marriage is to take place at the Church of St. George, Hanover Square, Mayfair, London, on May 1, 1815 at two in the afternoon. I am fully aware that this is not a proper or appropriate time for a wedding. However, the church has been quite busy of late, sometimes with two and three weddings scheduled a day, and neither the bride nor groom were willing to wait weeks just so they can be married before noon. Thus, they have expedited matters and obtained a Special License. This was mainly due to Mr. Bridges not willing to wait longer than necessary to make Miss Mirabelle his bride.


A wedding breakfast shall follow at the home of Lord and Lady Bentley, and a ball will be held that evening. I do hope you’ll join us for this most celebrated event. Besides the Trents, friends and acquaintances you might be familiar with will also be in attendance, but I don't dare give their names away. That would ruin the surprise.


The Right Honorable Countess of Bentley


She lifted her chin and smiled. Juliette and Hélène stood beside the bride, while John and Brachton served as witnesses beside Bridges. This chapter of her life might be closing, and an adventure was exactly what she needed. She was free and there was no reason why she should couldn’t be happy too. Her smile grew broader. She was a widow with means, no need for a gentleman, and in that moment, Rose decided she was going to finally enjoy herself to the fullest extent.
Posted by Jane Charles at 6:26 PM