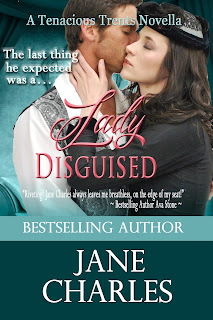 Mr. Sebastian Stanwick never intended to marry. It was bad enough that his father gambled away everything they owned and then drank himself to death, leaving his mother broken until she could not go on. But the death of his good friend at the hand of the man’s wife only solidifies Stanwick’s decision to remain a bachelor. Women were simply unpredictable and unstable if not taken care of properly.

Hélène Mirabelle wants few things in life. One, is to perform on the stage, and the other, is to be out from under the roof of her overbearing new family: Lord Bentley and the Trent brothers. Since her mother’s recent passing, Hélène's desire to return to Milan and the stage has only grown. A husband could never fit into the plans because no decent man would take an actress as a wife.

One fateful night leaves Hélène questioning if being an actress is the only thing she wants, while Stanwick begins to wonder whether all women are truly prone to madness and if they are, he may never get Hélène off of his mind.

“Yorkshire?” Hélène Mirabelle Trent glanced around the parlor decorated in pale blue and gold in the Acker London Townhouse.
“Yes,” her sister-in-law, Elizabeth Trent, answered. “We are to leave at the end of the week.”
“Why?”
“For Christmas, of course.” Elizabeth smiled. “Because the roads are unpredictable this time of year, we want to make sure we arrive before the twenty-third.”
Why must they travel to Yorkshire? Hélène wanted a simple, quiet Christmas with just her sisters and Maman, which was impossible.  Maman had been dead for five months after succumbing to consumption, and Juliette, her older sister, was now married to Lord Acker.  Neither she nor Hélène’s twin, Genviève, lived with Juliette and Acker, but with their recently discovered half-brother, the Earl of Bentley and his wife.  Hélène would prefer to live in the home on Henrietta Street in Covent Garden near the theatres, but her brothers wouldn’t allow her to do so. The lot of them thought it unseemly.
Hélène hadn’t known her four half-brothers and half-sister even existed until seven months ago, yet it hadn’t stopped the gentlemen from taking over and dictating her life.  At least Bentley and the brothers were allowing her to stay with Juliette during their short visit in London.  She had missed Juliette terribly over the last few months.
“My grandfather insists my sister and I come home for Christmas this year,” Elizabeth explained.
“I don’t understand why we need to be there as well.”
Elizabeth chuckled. “Because my husband now has his three brothers and four sisters with whom to share the holiday. He has not had everyone before,” she explained. “When he said as much to my grandfather, it was decided that the entire family would go to Yorkshire for Christmas.”
Hélène clenched her teeth and bit back a retort. She was highly tired of others deciding what she would be doing, without once inquiring if she wished to participate. She wasn’t a child, incapable of making her own decisions, and hadn’t been treated as such for several years. Hélène wanted to tell them all to go hang and she would do what she very well pleased.
Elizabeth reached over and grasped Hélène’s hand. “There is an estate that borders Grandfather’s and stands vacant. He was able to rent it through Twelfth Night, and we will all stay there together.” She grinned. “As long as we are at the castle during the day and early evening, Grandfather will be happy. As long as we have the privacy of our own home, John is happy, which means I’m happy.” John was the youngest of four brothers.
“Grandfather has also taken control of the situation,” Elizabeth added.
Hélène knew the particular situation in question was sorting out how to let society know that her now-late father, the former Earl of Bentley, had married and sired a daughter when he still had a wife who was very much alive. He had let society believe she had been dead, along with his daughter, for nearly twenty-two years. “I don’t know how His Grace can change anything. It will be a scandal whether anyone likes it or not.”
“Grandfather is The Duke of Danby,” Elizabeth reminded her. “He has more power than any of us like to acknowledge. If anyone can defuse a situation, it is Grandfather. I can almost guarantee that when spring arrives, nobody will dare shun anyone in the family. ”
Hopefully the rented estate was large, and the castle even bigger.
“When Twelfth Night has passed, we will return to London. While Bentley returns to the manor, we will spend our days shopping and preparing you and Genviève for your coming out,” Elizabeth announced.
Just the thought of being presented to the ton as if she were eight-and-ten was enough to make Hélène break out in a rash. She was not a debutant and never had been, nor would she ever be, yet her brothers would not accept that fact.
Hélène wasn’t even sure she wanted to remain in London and knew she didn’t wish to go to Yorkshire. She wanted to return to Milan where she could continue acting, making costumes, and experimenting with different makeup and wigs. She belonged in Milan. She had to find a way to come up with the funds to buy passage, rent a room, and buy food until she could work again. And she needed to find the money before the Season began.
“Good afternoon, ladies,” Acker announced as he walked through the door with Juliette.
Acker thumbed through the post and dropped an envelope into the waste can.
“What is that?” Juliette asked.
“Another invitation to Dagger’s Haven.” Acker shook his head. “I don’t know why Stanwick keeps sending me vouchers. I am already a member, though I don’t visit often.” He smiled down at Juliette, who was apparently the cause of Acker not visiting this particular establishment.
Dagger’s Haven. It sounded slightly dangerous. “Is it a gaming hell?” Hélène asked.
Acker nodded. “No cheating, no women, and Stanwick always comes out ahead.”