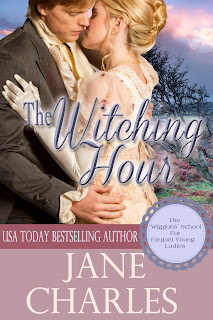 Gabriel Westbrook has spent his adult life building a wicked reputation to hide his true identity as an agent for the Crown. When his latest assignment brings him to Cornwall to capture French spies, nothing has prepared him for three meddlesome schoolgirls at the neighboring Wiggons’ School for Elegant Young Ladies who have decided that his secretive ways must mean he’s a witch. And nothing has prepared him for the feelings he begins to develop for the trio’s young teacher who may not be who she says she is.

If he never went so farre as is before mentioned, yet for certaine he met with the Devill,
and cheated him of his Booke, wherein were written all the Witches names in England,
and if he looks on any Witch, he can tell by her countenance what she is; so by this,
he helpe is from the Devill.

The Discovery of Witches by Matthew Hopkins, Witch-finder