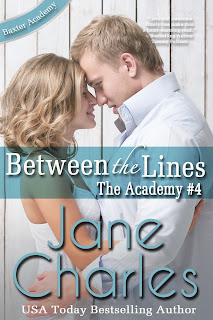 Ellen West seemed innocent enough, despite her being a journalist, when she moved into an apartment above Gabe Kent. And, the timing couldn’t be better. He’s on spring break and she has few commitments.  After a quick trip to New York where Ellen insists she’s going to get him some culture, matters progress in their normal fashion with both wondering if it’s possible to fall in love so quickly.

The whirlwind romances comes to a sudden halt when Ellen’s past catches up to her and she hides her fear and the truth of Gabe. Gabe can’t be with anyone he doesn’t trust and who can’t trust him, and he does his best to put her from his mind. All goes well until Ellen shows up in his classroom at Baxter Academy of Arts with every intention of doing an exposé on the school.

With his job on the line, Gabe discovers the nosey reporter might have a different agenda all together. When danger threatens, he has no choice but to help Ellen. But, will she let him? And, will they ever be able to learn to trust the other again?

Between the Lines
Copyright © 2015 by Jane Charles

I knew I recognized them and it was confirmed as soon as I looked at the Baxter website when I got to my apartment. Mateo Perez is a counselor and the blond hunk with piercing blue eyes is the English teacher, Gabe Kent.
I can’t believe my luck.  I thought I’d have to waste the rest of spring break finding some kind of entertainment before I could begin my interviews at the school. Even though the appointment isn’t until Monday, I wanted to get here a week early and get settled. I just didn’t anticipate how small the town was and that there’s hardly anything to do here. If I can get these two to talk I can begin working on my story now.
“Sure,” Mateo says, opening the door wider. Normally, I wouldn’t just go to a strange man’s apartment, especially one containing two strange men, but since they work at Baxter, I don’t feel overly threatened.
The conversation I heard in the emergency department at Bellevue Hospital replays in my head. Maybe this isn’t wise, but I have a school to investigate and a story to write, and I’ve been in far more dangerous situations.
“Come in,” Gabe says. “Want a beer, soda?”
I bite my lip. Now’s my chance. “A beer would be nice. Thanks.”
Mateo goes to the fridge and grabs a beer. “So, where did you come from, Ellen?” He twists off the top and hands it to me.
“New York.”
“Why are you here?” Gabe asks in surprise.
I get it. This is a small, quaint town, from what I’ve seen of it. The complete opposite of New York City. “I’m working on a story and this seemed like a good place to be.”
“Have a seat,” Mateo says as he hands me the beer.
There’s one chair and a couch where Gabe is sitting. As he’s more in the center than on one end, I sit in the chair because I don’t want to jostle his injured knee.
“So, you’re an author.” Mateo grins. “What do you write?”
It’s on the tip of my tongue to lie, but I don’t. This one is too easy to confirm, but I hope it doesn’t put them off. “More of a journalist.”
Gabe frowns and takes a swig of his beer.
“What newspaper, or is it a magazine?” Mateo asks.
“Neither,” I admit. “I thought I wanted to work for a major newspaper but quickly learned after an internship that I wasn’t cut out for working for big companies. I don’t like being told what to do and what to write.” That’s why I started my blog. It was the only thing I could think of to use my investigative reporting degree for the purpose I got it in the first place. I have scores to settle and people to save. Newspapers and magazines may report on politics, but they have a whole political system of their own that I don’t want any part of. It’s the same with any corporation. You can only rise as far as you’re willing to kiss ass, and I don’t kiss anyone’s ass. “I do freelance work sometimes.” Which is the truth. I just don’t do it real often. I shrug. “And, I have a blog.” They don’t need to know that the blog is my job, and my purpose in life. And my current assignment, which I gave to myself as soon as it came on my radar, was to investigate the Baxter Academy of Arts. Not that these two need to know that, just yet.
Mateo’s phone beeps and he pulls it out of his pocket and answers.
“Okay, got it. Be there in a bit.”
He hangs up and puts it back in his pocket as he stands. “Mag needs me. Gotta go.”
Gabe simply nods.
If I hadn’t researched Baxter, I’d assume Mag is a friend or something, but Mag is an Administrator of some sort at Baxter. Why would she need Mateo during Spring Break?
Posted by Jane Charles at 11:07 AM