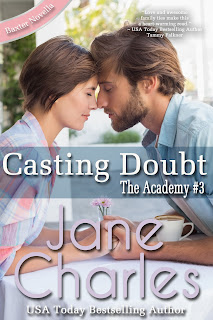 Deirdre O’Brien had briefly met Jesse Tinley, an art instructor at the Baxter Academy of Arts, one Sunday afternoon in November. After returning to classes at Vassar, Deirdre could not stop thinking about him. When spring break arrives, she knows exactly who she wants to spend it with.

Jesse Tinley was immediately attracted to Deirdre O’Brien, but they only had an afternoon together. Even though he’d like for there to be more, he knows it’s not possible. Deidre’s still in college and he has two jobs and a son. When Deidre shows up in his studio the first day of Spring break, he begins to hope for more.

Unfortunately, any romance could be snuffed out before it has a chance to begin. All because of a babysitter named Larry.

This is an expanded version of the short story that appeared in the “Fifty Ways to Kill Your Larry” box set.

I was wondering if I’d ever see Deirdre O’Brien again. I’ve wanted to, but she is way out of my league—a Vassar student working on her cognitive science degree. I’m not even sure what you do with a degree like that. She’s also only twenty. Not that that’s too young. But, I’ll be twenty-five in a few months. I’m done with school and have a nine-month-old son. She doesn’t know that and I was careful not to let it slip during our one conversation.  Nothing sends a pretty, single girl running quicker than a guy with a baby. At least that’s been my experience.
I grab two cups and pour the coffee. “Shopping for anything special?”
She shrugs. “Not really. Wandering around is more like it.”
“Staying with your brother?” Kian, her brother, is a deputy and liaison to the school I teach at. He lives with the other art teacher, Alexia.
“Yep.” She takes the cup of coffee. “Thanks.”
“Do you need cream, sugar?” Shit, I hope she doesn’t want cream. I only have milk and that’s upstairs.
“Just black.”
Whew.
“I didn’t think you’d be here. Alexia already went to school.”
Damn. I hoped she’d stopped in to see me. Guess not. Still, I’m glad I was here. “I’m only part-time,” I explain. “Alexia has taken on more of the administrative duties for the department, which I’m glad, because I don’t need to close the gallery in the morning to take care of paperwork at Baxter.”
Her light-brown eyebrows draw together. “Part-time?”
Shit, now she’s going to think I’m a looser. An artist with a shop that does mediocre business with a part-time teaching position. “Academics are in the morning at Baxter. Art classes in the afternoon. I teach from one until school is out. Three classes each day.”
“So, you need to close shop every afternoon?”
“Usually,” I answer. “I don’t get much traffic in the hours between lunch and supper anyway, so it’s not that big of deal.”
Deirdre’s frowning now. I wish I knew what she was thinking.
“That’s a shame that you can’t be open all the time.”
I shrug. “Maybe someday I’ll hire someone older than Larry who can be here. Until then, I do what I can.” Besides, it’s not just the shop and teaching I need to worry about. Not that I tell Deirdre about my other obligations. Nor is it a hardship, but I kind of like how my schedule is because it does free me for the more important things in my life. “Besides, I can work back here when I don’t have customers, so it’s a win-win situation.” Between teaching, the gallery and everything else, I have little time for ceramics and sculpting these days. As much as I wish the gallery was bustling in the morning, the quietness gives me time to do what I really love. Otherwise, I wouldn’t be sitting down with the clay until eight at night and by that time I just want to veg in front of the television until I haul my ass off to bed a ten.
Sometimes I feel more like I’m seventy than twenty-four, but since I get woken every morning around five, I need to get to bed early. At least, I’m back to sleeping through the night without interruption, so there is that. Thank goodness.
”So, is this your break week?”
“No.” Deirdre grins.
Is she skipping school in the middle of the week? Why else would she be in town? “It’s not until next week but the teachers are either sick or giving us a break, and I got out of there as soon as I could. I don’t have to be back until a week from Monday.”
I grin at her. If she’s going to be in town, my Spring Break may be better than I anticipated. Though I’d planned on spending it working to replace some of the pieces I’ve sold and to fill the empty spots on the shelves in the gallery, spending time with Deirdre would be a lot more fun.
What the hell am I thinking? She’s just out wandering around and wasn’t expecting to see me. She probably went into other shops on the square but I’m the only one who offered her coffee.
I open my mouth to see if she wants to get dinner tonight or maybe lunch tomorrow, since Larry is already working, when a cry comes from upstairs. I wince and all hope of seeing Deirdre again all but disappears.
Posted by Jane Charles at 10:37 AM