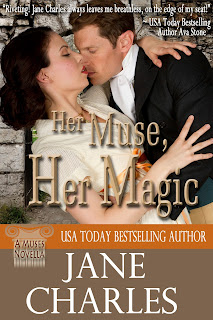 Brighid Glace is not a witch, no matter how many times Blake Chetwey has called her one. She's a healer and he should be quite grateful she is too. Without her abilities, he might not survive his holiday at haunted Marisdùn Castle when another bout of Malaria hits him. But should anything terrible ever befall Blake, Brighid would never forgive herself if she didn't do all she could to save him. Her heart would never survive otherwise.

After years of denying that Brighid’s mere presence affects him in ways he can't understand, Blake's future is now in her hands. She is lovely, and enchanting, and only a witch could make him feel such things. Was his fevered state causing him to see her in a different light or could he no longer deny what he has tried to ignore? And would he now lose her to a friend?

** This novella originally appeared in “One Haunted Evening”, an anthology.

Her Muse, Her Magic
Copyright © 2015 by Jane Charles

Blake Chetwey pulled his greatcoat close around him and clenched his jaw to keep his teeth from rattling together. With each bump in the road, his body protested in pain. Bloody hell! Now was not the time for another episode. Not that there was ever a good time, but he had been looking forward to the coming weeks and the party his hosts were planning. What healthy gentleman did not look forward to a celebration where young ladies might not wear undergarments?
He groaned. He was far from healthy at the moment and could only pray that this episode was of a short duration. Malaria! That is what the doctor in Barbados had called it and warned him that he would most likely have recurrent attacks, without warning and for no apparent reason, in the coming years before the disease had purged itself from his body.
Blake turned his head to look out the window at the passing scenery. He should have had the driver take the road to Tolbright a few miles back. Beyond the small town was Torrington Abbey, his home for a good portion of his life, and the estate he would one day inherit from his uncle, the Earl of Torrington.
He preferred to suffer through this episode in his own bed instead of the haunted Marisdùn Castle. Not that the Abbey wasn’t haunted. Well, at least it was for a short time, but Blake never saw evidence of the rumored ghost to be roaming the halls either. And could he really consider the last haunting to be an actual haunting?
“Do you really believe Marisdùn Castle to be haunted?” David Thorn asked from across the carriage.
Had the man been reading his mind? Blake assumed Thorn was thinking about ladies without drawers. It was a favorite pastime of his. Blake simply shrugged. Who was he to decide if a place was haunted or not? A year ago he would have scoffed at the idea. Not any longer.
“And, is it true that Patrick Delaney once haunted Torrington Abbey?” Thorn continued. “Or did you invent the entire story?”
Blake groaned and glanced at his friend from the corner of his eye. He should never have told Thorn or the others about what Delaney and his sister, Laura, believed. If he hadn’t been in his cups following the races, he would never have breathed a word of their story, of how Delany had hovered between life and death after being attacked and left for dead, and how his spirit left his body and had gone to Laura to what they assume was to deliver the message that was intended for her, though he couldn’t recall what the message was until he awoke, alive, and in his own body. Blake didn’t understand it all; and doubted that he ever would. It was Brighid’s explanation that when Patrick hovered closer to death, his spirit was set free and not chained to his body. Though nobody could ever explain why Laura had been the only living person able to see Patrick, even though he’d been in the presences of Blake’s aunt and uncle, as well as servants and other guests at Torrington Abbey. Brighid believed it was because Patrick sought only Laura as she is who Delany was on his to see.
He snorted and returned his gaze out the window. Brighid Glace is a charming yet odd young woman. If Patrick had haunted Torrington for a bit, then Brighid truly was a witch, as he always accused her of being. However, he was certain there was a reasonable explanation for what Patrick experienced. He simply hadn’t discovered them yet.
“Well, did you?”
Oh yes, he had forgotten to answer Thorn. Why was he having such a difficult time concentrating? Could it be because he was so cold, or maybe it was the headache he could no longer ignore? “You’ll have to ask Delaney.”
“I’ll make sure Braden sends an invitation so I can find out for myself.” Thorn glanced out the window as the carriage began to slow. “I believe we are here.”
Blake didn’t rise to see for himself. He knew what Marisdùn Castle looked like. As long as it had a warm room and soft bed he didn’t care if it was haunted by two dozen ghosts. They just needed to leave him alone so he could rest until this episode passed.
The carriage rolled to a stop, and a moment later the driver opened the door. Blake jerked away from the bright light that flooded the interior of the carriage.
“You don’t look so well,” Thorn observed.
Blake waved him away. “I just need rest.” He pushed himself to the end of the seat and tried to stand. His legs protested and his body screamed in pain.
“Are you having an episode?” Thorn’s brow was marred with concern.
He could only give a slow nod before letting his head rest against the squabs.

* * *
Brighid Glace tied the strings of her bonnet beneath her chin. “I shan’t be long, grandmother.”
“Where are you off to?” the older woman asked from her chair beside the fire.
“I told you.” She offered the woman a loving smile. “I am to go into Ravenglass.”
“I don’t know why you can’t go into Tolbright,” grandmother grumbled. She never liked Ravenglass, and Brighid never understood why, except grandmother always claimed the people had strange ideas and superstitions.
Brighid grinned. “We can’t get Daphne Alcott’s rum butter in Tolbright, and I promised to bring Spikenard, Monk’s-Hood, and Horehound to Mrs. Small at Marisdùn Castle. They have none of their own left.” She paused in thought. “I should really see about harvesting the remaining herbs before winter sets in.”
The older woman frowned deeply. “I don’t see why they can’t gather their own herbs. Besides, Ravenglass boasts a fine doctor.”
“The servants don’t have the time to tend the garden, nor anyone who has learned the use and preparation of medicinals since the Widow Wythe passed.” Brighid chastised. “Besides, they don’t wish to send for Dr. Alcott each time one of them has a slight cough or minor injury, and our family were the healers at Marisdùn Castle long ago. It is only right we continue to help when asked.”
“Maybe you should teach someone so you aren’t running off there so often.”
Brighid bent to pick up her basket full of herbs. “That is exactly what I intend to do, if someone will agree.” Since the Widow Wythe passed on, Brighid had seen to the care of the medicinal garden nestled behind the kitchens and herbarium. It wasn’t part of the vast, carefully manicured and well-tended gardens on the rest of the grounds but a purposeful array of plants with no thought to color. They served to heal not to be viewed for their beauty. That isn’t to say it wasn’t a pretty garden. She loved sitting in the middle of it, on the flat, dark, round stone. There were a few benches at the edge, but she rarely sat there. For the oddest reason, the stone always warmed her, even on the coolest days.
“Just like your mother, off and about, nursing the sick when you should be tending your family,” her grandmother grumbled.
Brighid pursed her lips together to keep from responding. Her mother had been a healer. With only one doctor in the area, sometimes she had been needed to treat the ill and act as a midwife until the physician could arrive. It was just a shame that the one person her mother had been unable to help was her own husband. Her mother had not been the same after she could not cure the illness that caused father’s death and soon followed him to the grave. Brighid suspected it was more from a broken heart than anything else.
Besides, her grandmother did not need tending. The woman may be getting on in years, but she was strong, healthy, active, and possessed all her faculties, even if she could be unpleasant at times. It was she who did the cooking and most of the cleaning in their house. Her brother, Cavan, was home only long enough to eat and sleep. If he wasn’t working the land and dairy, he was in Torrington with his friends.
“Just don’t be long,” her grandmother insisted.
Brighid paused at the door and stared down into her basket.  She should take Wormwood. Had Mrs. Small requested this medicinal herb as well? She couldn’t recall but knew she needed to take it anyway. Brighid no longer questioned these odd sensations or thoughts. Her mother termed them a gift, and she listened to them every time.
Posted by Jane Charles at 11:24 AM