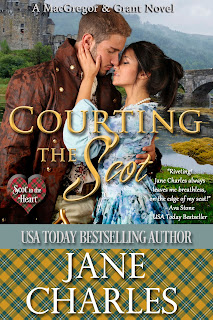 When a rake’s silver tongue fail to charm…

Ian Grant has wanted to court a certain lass for quite some time, but when his usual charm has no effect on Davina MacGregor, he stops talking and kisses her instead. And what a wonderful kiss it is too. Unfortunately, his rakish reputation precedes him and Ian somehow finds his honor in question and a challenge issued. Can he go to London for a Season without kissing anyone else?

A lass finds the tables turned on her….

Davina MacGregor only meant to protect her foolish family from being sent to the gallows should anyone discover what they’d done. She didn’t want to make Ian court her in secret, she just didn’t have another choice. But when he tires of her games and issues a challenge of his own…

Will the lass truly court the Scot?

Courting the Scot
CHAPTER ONE