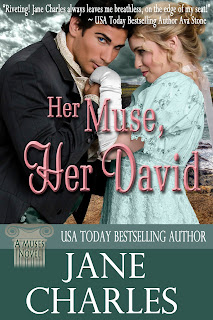 When Mr. David Thorn returns to Marisdùn Castle for another haunted Samhain masquerade, he hopes to encounter the elusive artist who sketched him the year before disappearing into the night. But finding her might be difficult, especially if she’s one of the many ghosts who haunt the castle and its grounds.

Miss Anna Southward would give anything leave her uncle and the sleepy village of Ravenglass behind her to travel the continent as she had as a child. Stuck near the seaside in Cumberland, she dreams of the day she can return to Florence to once again gaze upon the statue of David, and she dreams about a certain gentleman she encountered at the previous year’s masquerade. When the gentleman in question stumbles upon her, Anna is certain her luck is about to change.

But when a powerful entity is accidentally released inside the castle walls, all bets are off and Anna fears not only for herself, but for the handsome gentleman she sketched a year ago.

*This story originally appeared in the One More Haunted Evening anthology. The single contains scenes previously omitted from the anthology.*