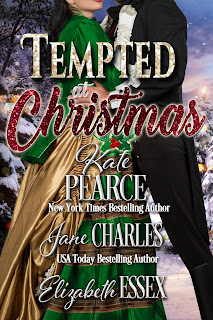 Anthony Beck, Viscount Redgrave, has always done what was expected of his title and station. Ever the dutiful son, he abides by his mother’s requests even when they tend to the ridiculous. There is no other reason, after all, that he would visit a gypsy camp to acquire a piece of dead mistletoe that should rejuvenated itself once he is on the path of true love. Luckily at the gypsy camp, he happens upon the one lady he’s always wanted to court. Unfortunately, she’s in love with her guardian…

Miss Holly Prescott is not in love with her guardian. It is her duty, however, to make certain that nefarious young ladies with hopes of becoming his duchess, don’t trap him into a loveless marriage. While attending the Christmas Eve weddings at Castle Keyvnor, Holly learns that the nearby gypsies could be of help in that regard. However, she did not expect to stumble upon the handsome and oh-so-honorable Lord Redgrave in the process.