Shadows of Memories: The Academy # 2 (Baxter Academy Series ~ The Academy) 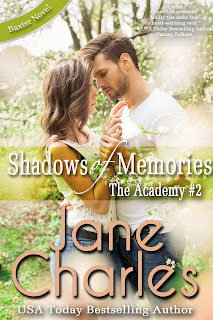 Jenna Ferguson had the biggest crush on Cole Harper in high school. He didn’t know she existed. Seeing how he now has one of the worst reputations, she’s happy to have never been on his radar. Now, six years later he’s back in her life, and just when she least needs complications. She's got her hands full with her job at Baxter Academy during thy day and trying to figure out what to do with her aging grandmother who isn't at all what she used to be at night. There isn't any time in her schedule for any man these days, and most definitely not for a certain sexy fireman.

If there's one thing Cole Harper knows, it's that Jenna Ferguson needs someone to lean on, someone to love her, and that someone really should be him. He knows what she's going through with her grandmother as he's lived through a similar experience himself. If only she realized he's not the guy he used to be, and if only she'd give him the chance to prove it.

"Shadows of Memories is a romance novel that will never be forgotten by its readers. Readers everywhere will fall in love with this incredible and most compelling story of the century. Fans of the famous Fault in Our Stars movie and novel will be just as moved by this masterfully crafted and beautiful romance written by Jane Charles..." -  UniversalCreativityInc14

"…The author totally won me over in her intro, where she discussed her life with her mother        and how her mother's memory loss affected the family. There's a lot of real life in this book, and it's jam packed with the feels..." – BestSelling Author Tammy Falkner

The sudden, loud blast of an alarm jerks me from my concentration. Bright, white lights are flashing out in the hall right outside of my office. “Fire alarm?” There wasn’t one scheduled. Not that the administration at Baxter always tells us when there’s going to be one, but this is really inconvenient. I have work to do.
Then again, there really could be a fire. It wouldn’t be the first time one of the students tried to set one. Luckily, those incidents are few and far between and have only happened once since I began my employment eight months ago.
I close and grab my laptop, along with the messenger bag I use as a purse, and go into the hall, wishing I had earplugs to block out that obnoxious alarm blasting over and over. The rest of the staff are also headed toward the marble stairs of the administrative building and look about as happy about the interruption as I am. This building was the old Baxter plantation house and given its age, I probably shouldn’t rule out a real fire. Shit, is there anything else I need in case the place is going to go up in flames?
I throw my bag over my shoulder and grab the banister as I start down the stairs. The entire school is set up on the Baxter Plantation, which dates back to sometime in the early 1800s and is modeled after Washington’s Mount Vernon. At least that’s what I’ve been told, and that it’s bigger. Since I’ve never visited Mount Vernon, I have no idea how accurate the model is, though it looks more like Tara from Gone With the Wind with a staircase to rival the one at the Wilkes Plantation.
Our offices are in what were once bedrooms, and the lower floors are filled with receiving and reception rooms, along with a couple of offices for the school’s administrators.
Damn, I forgot my cell phone. It’s charging at the side of my desk.
I turn around as I reach the landing and begin to go back upstairs.
“No going back in.” A firefighter in full gear is standing at the door.
“My phone.”
“Isn’t worth your life.” He points to the front door.
Maybe there really is a fire.
The others are gathering outside and Officer Kian O’Brian, the school’s liaison with the Sheriff’s Department, is standing in the center of the circular drive, directing each of the employees to drop their stuff into a cart latched to the riding lawn tractor but I’m not about to set my laptop down on a wet, dirty surface so I shoved it into my bag first.
After leaving it with him, I follow the rest of the staff toward the back of the campus. We’ve each been assigned a building to help in times of evacuations. Mine is the theatre. By the sounds all around me, the alarms have been triggered in each of the buildings. Students and adults are streaming out from everywhere. Not all of the buildings can have a fire in them. Did the Fire Department even think this test through? All it takes is the smallest thing out of the ordinary to set these kids off. We can deal with a handful of kids having meltdowns or going through an anxiety attack. A whole campus is an entirely different matter. Why couldn’t they just do one building at a time?
Jada Daniels is clutching a sketch-pad to her chest and a firefighter is pointing to a pile of what I assume are student belongings. She isn’t about to give it up.
“Let her be.”
“Students aren’t allowed to bring anything.”
We’ve all heard the lectures before. When a fire alarm goes off, you’re to leave and not take time to grab personal items because it could mean life and death. I don’t know what Jada has in her sketchbook but it might as well be an appendage because it’s always with her. “Jada, were you holding the sketchbook when the alarm when off?”
“Yes.”
I turn back to the firefighter. “It was already in her hands, so I don’t see any harm.”
He frowns but finally turns away.
I help gather the kids together, away from the building, as the instructors do a head count. The same thing is happening throughout the campus while the firefighters do an inside check of all the buildings.
When they’re finished we’re all instructed to take seats in the theatre. “Great,” I mumble under my breath. I know I should be more of a team player, but I’m on deadlines.
We usher the kids inside as Kian drives the tractor toward the building. Thank goodness. I didn’t like the idea of leaving my purse and my laptop just sitting out where anyone could grab it. Most of the stuff on my computer is private because I have each kid’s test scores, their college and career choices, scholarship information and all kinds of stuff nobody else needs to know about.
I walk over to him and reach for my bag.
“Not yet.” He grins and motions toward the theatre.

The only firefighters not at the school today are those on call at the station. They are also the ones most familiar with the setup of Baxter. The students take their seats and only a few are carrying items. They did a lot better than the teachers and staff, who grabbed all kinds of shit on the way out the door. They’re the ones who should know better.
Kian is talking to a dark haired woman who looks vaguely familiar. It could be that I’ve seen her around the campus but I know that isn’t it. Where have I seen her? I know I should know her name too but it isn’t coming to me.
Crap, this is going to bug me until I figure it out. She’s gorgeous so why the hell don’t I remember her name? She’s not someone I’d forget.
A student hands her a book and I instantly know who she is. Jenna Ferguson! I haven’t seen her since high school. Not that I ever really talked to her that much, but I certainly noticed her. Always had her nose in a book. She was pretty back then. She’s fucking hot now.
Dylan St. John comes to stand beside me, along with a few other firefighters. The buildings have been cleared and as soon as everyone’s seated it’ll be lecture time.
“When did Jenna Ferguson come to work at Baxter?” I whisper to Dylan. We attended middle and high school together. He and Jenna were good friends. At least they were back then.
“In June. She got her masters and is a vocational counselor.”
“Damn, she’s hot.”
Dylan narrows his eyes at me.
“What?”
“She’s still a good friend.” He leans closer. “And, I know your reputation.”
I ignore his warning. “She seeing anyone?”
“Would it matter?”
“Hey, you’re supposed to be my friend too,” I remind him.
Dylan blows out a breath and crosses his arms across his chest. “She’s not seeing anyone that I’m aware of.”
This day just got better.
The chief steps to the microphone and begins his speech. This exercise was to introduce the newest firefighters to the layout of Baxter and to remind those already on the department how many buildings need to be searched. It’s a refresher for the teachers and administrative staff of the importance of fire drills, and its good practice for the students.
“The students and teachers did great.” There’s cheering from the audience. “The staff in the administration building failed.”
Really, they failed?
Everyone else is dismissed except those who have offices in the old plantation house. Kian, along with a few firefighters, starts piling bags and purses on tables as the chief begins a new lecture. “Each of those items represents a precious moment. And, each moment risks a life.”
I’d like to think that if they would’ve smelled smoke or saw a flame, purses and shit would have been forgotten, but I’ve been on calls where those very things were clutched in someone’s hands when they succumb to smoke inhalation.
“You may now retrieve your items.” He gestures to me and Dylan. We have the honor of giving back the items that were so precious they were willing to risk their lives.
Posted by Jane Charles at 10:19 AM