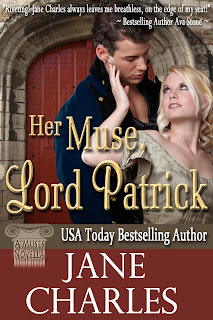 Lord Patrick Delaney promised to deliver an important message to his best friend’s sister, but promises are hard to keep when one becomes a ghost. After Patrick is attacked in the forest and tossed into a river, he is surprised to wake at the country estate where the lovely Miss Laura Chetwey is mourning the loss of her brother. Even more surprising, she seems to be the only person who can see or hear him, which should make his mission easy to complete… if only he could remember the message he is supposed to deliver.

Laura’s brother has been missing for four months and she has come to believe he perished at sea. Taking refuge at her uncle’s estate, she tries to escape her grief by immersing herself in the imaginary world of fiction by penning a horrid novel. But the line between reality and make-believe becomes hard to distinguish when a handsome ghost arrives at Torrington Abbey to protect her and steals her heart in the process.

Trapped between the span of life and death, Patrick fears he will vanish forever once he remembers the news of Laura's brother. Will they ever have a chance to be together, or is the opportunity for love lost to them forever?